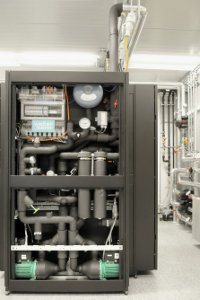 PC modding enthusiasts will know that if they want to overclock their rig to its full potential, there is always the water cooling route to take. After all, stock modification of its clock speed can only go so far before the chip becomes a useless piece of melted silicon, and fans aren’t exactly the best way to keep things running nice and cool no matter how large the blade is. Liquid cooling, on the other hand, helps unlock the full potential of the processor as it pushes everything to the extreme, so it is rather interesting to hear of computing giants IBM come up with the IBM Aquasar which by its name alone, you can tell that it has something to do with water. You’re right – the IBM Aquasar is the first-of-a-kind hot water-cooled supercomputer which is currently seeing action at the Swiss Federal Institute of Technology Zurich (ETH Zurich).

This uniquely configured Aquasar computer will consume up to 40% less juice compared to a regular air-cooled machine, but thanks to the direct utilization of waste heat in the building’s heating system, it results in an 85% reduction in carbon dioxide emissions. Now how about that when it comes to keeping things nice and green? Imagine if all the supercomputers in this world were to run on such a principle, how different things would be then. At least it shows that nerds go out of their way to keep the world green for the next generation. Apart from that, it will require less powerful air conditioning within the server rook of a networked office building or data center, which will also yield greener results in the long run.