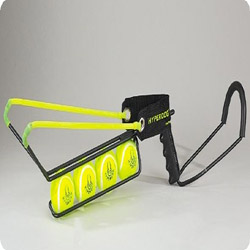 You’re dog loves to play fetch, but you just hate it. Maybe you’ve got a terrible arm and can only throw a miserable 50 feet, or you just hate touching the slimy ball after it’s covered with your dog’s slobber. You won’t have to embarrass yourself in the park any longer, that is, if you have a HyperDog Tennis ball Launcher.

It looks pretty weird, but it does what it does well. That is, it lets you throw tennis balls without actually touching them.

You can hurl balls for 50 yards, probably more if you practice long enough. The site does say it takes awhile to get used to, but once you’ve adjusted to hurling, you’ll never go back to throwing.

The HyperDog will hold 4 tennis balls in its “magazine”. When old Sparky comes back with a slobbered up one, you can use the HyperDog’s scooper to pick it up, store it in the magazine, and take a fresh one out and repeat.

Using this in your back yard may not be the best idea, though, it sounds like this thing really hurls them, and having to pay for a neighbor’s, or you own, broken windows is never fun. Also, this will not solve the problem of your dog being to stupid to actually follow the ball, or being to lazy to get up and fetch it.

Never have to touch a slobbery ball again, or embarrass yourself because you can’t throw, get yourself a HyperDog Tennis ball Launcher. Available for $25 from PetGadgets.com.\