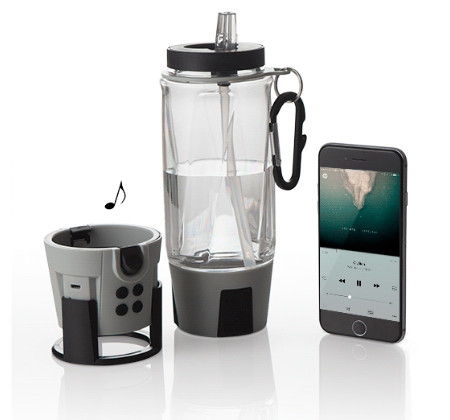 It does seem to me as though many things these days will come with some sort of “smart” moniker, one way or another. After all, it is one of the ways to draw the attention of many, not to mention make you look and feel cool along the way! Where water bottles are concerned, most of us would be all right with an ordinary bottle that can hold such life giving liquid, but for geeks, it would be better if the ante could be upped with the $59.99 Hydra SmartBottle.

The Hydra SmartBottle is not only a 20-ounce BPA-free water bottle, it boasts a whole lot more features than that. For starters, it will come with a bunch of LEDs embedded in order to transform it into a lantern as and when required. Need to share your music with a group of mates? Not a problem, there is also an integrated premium 5W Bluetooth speaker, accompanied by hands-free speakerphone capability. You can also subject yourself to random DJ pickings via the FM radio, while it doubles up as a 4,000 mAh power bank to boot. Other features include RGB LED lights with three color modes, hidden storage, a carabiner with bottle opener, and a free app.