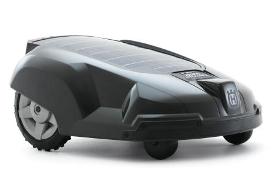 As you can see by the title, this Husqvarna Solar-Powered Robot Lawnmover deserves its own acronym. Of course, HSPRL is really lame, and I suppose the Swedish-based company will have to change a few of the descriptors into synonyms that start with vowels so they could get an actual word.

This HSPRL (just humor me for this article’s sake) was announced at the Green Industry and Equipment Expo 2008. I’m certain that this isn’t the first autonomous robot lawn mower, but I’m guessing this one won’t be the last.

Of course, the real selling point of the HSPRL is the fact that it is solar powered, which doesn’t sound like an industry first. This limits it to daylight usage, but it uses a rechargeable nickel metal hydride battery.

With a similar weight as cordless options, this device weighs in at about 22-pounds, and can work a half-acre lot of grass with a wire that can be slightly buried or staked in place as a safety border. Speaking of safety, the Solar-powered lawnmower has some great safety features. For example, it will automatically shut off its blades when it is lifted, and built-in sensors to work around objects.

Unfortunately, the Husqvarna solar-powered lawnmower does not have a release date or price. I could give you an estimation based on another model the company produces, so we’re looking at about $2,000.