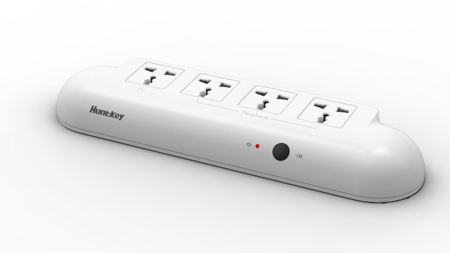 A couch potato will definitely be able to identify with the idea of controlling everything right there and then from the couch itself without having to lift one finger more than necessary. Even better if here is also another kind of robotic assistant that is able to deliver food and drinks to you at your whim and fancy. If that describes you perfectly, then you would definitely be able to identify with the introduction of the Huntkey TV Power Strip, where a solitary TV remote controller is able to ensure that your entire living room TV set up can be fooled around with without having to do what mere mortals do.

With the Huntkey Power Strip (model SZK406), it takes just a handful of steps when it comes to configuring the peripheral itself before you are able to keep your butt planted on the La-Z-Boy chair itself. Once you have inserted all of the power plugs of the slew of electrical appliances into the corresponding jacks on the extension socket, followed by pointing the remote control at the extension socket, the power strip will then be activated by itself, no worries. Within a single minute after the extension socket boots up, you can then point the remote controller at the TV set. Pressing it would turn the entire TV set on.

Apart from giving freedom to your feet so that they can relax more, this smart TV power strip has another advantage which would have your home’s accountant smiling at the end of the day – it boasts of power-saving capability, in comparison to traditional power strips. You will find able to find a standby mode come in handy, helping lower the power consumption of stereo sets, in addition to having them work in a more intelligent manner while offering safe technologies which will be able to conform to each country’s safety standards. There is no word on pricing as at press time though, so we will have to wait and see.