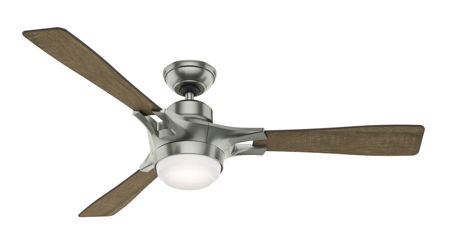 When it boils down to ceiling fans, you can be sure that the overall design and function of it has pretty much remained the same all these years. Of course, there has been innovations — albeit slight ones, from time to time that include a remote control so that you do not have to get up to the switch and change the speeds or turn it on, and in more recent times, to see an integrated lamp right smack in the center of the fan itself, offering a 2-in-1 solution. Hunter has come up with something that is even more forward looking now with its Signal smart ceiling fan. What makes the Signal smart ceiling fan different from the other models out there? For starters, it is not only Wi-Fi enabled, it is also Apple HomeKit-enabled, offering a whole lot more options this time around.

The Hunter Fan Company is no stranger when it comes to ceiling fans, so to see this highly anticipated Wi-Fi enabled, Signal ceiling fan debut is a pleasant surprise. Boasting support for Apple HomeKit technology, it will allow the Signal to seamlessly interact with other HomeKit-enabled products, resulting in a customized suite of comfort, security and energy efficiency.

With Apple HomeKit technology, users are able to easily and securely control each fan. Of course, they are also able to control a group of fans if they so desire, all from a single place as long as that device is capable of running the new iOS 10 Home app or Siri. In other words, the iPhone, iPad, or Apple Watch would be the vehicles of choice to control the Signal ceiling fan, and one can also set up HomeKit-enabled products to play nice with one another based on triggers, such as having the fan’s light turn on the moment the fire alarm detects smoke or creating a scene that automatically turns on the fan’s light and locks your front door simultaneously.

Not only that, HomeKit technology delivers advanced security with end-to-end encryption as well as authentication between the fan and the iOS device. The Signal will not come cheap however, as it sports a contemporary and sleek design with satin nickel housing, reversible wooden-finished blades, all for $379 a pop.