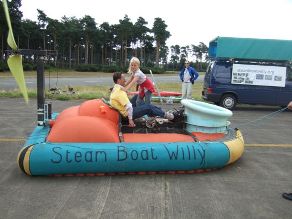 For years, scientists have been looking for ways to achieve human-powered flight. This human-powered hovercraft could be a small step forward in that quest.

The Steam Boat Willy is a project that has been under development for years by the London flight club (not to be confused with the organization started by Tyler Duerden). As you can see by the video after the jump, the vehicle is powered by pedaling like a bicycle. Not only does this inflate its raft-like frame, but it can spin the propeller for some forward momentum.

Granted, you could just do that on a paddleboat, but how many paddleboats do you know that can go on land? Of course, if you feel like resting on a paddleboat, you can do that. I would imagine that resting on open waters on Steam Boat Willy might cause you sink. Unless the frame has some buoyant devices built in, or something.

It doesn’t look like the Steam Boat Willy can turn on a dime, either. However, I think it should be mass produced, because who doesn’t want a human-powered hovercraft? It reminds me of those “Air-Car” ads that used to be on comic book novelty ads that promised easy-to-build hovering technology. I think I saw a Mythbusters episode where Adam and Jamie called these ads’ bluff, and found that most hovertech didn’t work as good as advertised.