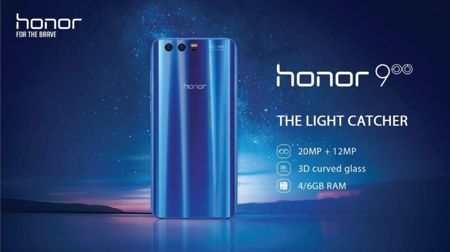 When it comes to having the best smartphone available, most of the time we would aim straight for nothing but the top of the line models — and this would definitely include checking out which particular flagship model catches our fancy. Huawei has certainly become a pretty strong player by themselves over the years, and it is with much aplomb that they recently announced their latest flagship, the Huawei Honor 9.

The Huawei Honor 9 is the 2017 flagship model from the company that comes with the slogan “The Light Catcher,” which would mean it has camera specifications that you would most probably drool over. On paper, the Huawei Honor 9 is a trend setter where dual lens cameras are concerned, delivering 20MP and 12MP lenses with the former being a monochrome lens while the latter is a RGB color lens. The RGB lens is able to faithfully capture the colors of the world in vivid detail, while the monochrome lens delivers additional contrast and detailed information at a level that the similar pixel size’s RGB lens is unable to provide. This makes the Honor 9 one of the more unique propositions when it comes to low light photography, with the monochrome lens being able to function as a solitary lens to capture true monochrome images.

At the back of the Honor 9 would be a gorgeous 3D glass segment and a metal bezel, delivering a subtle metal aurora that is certainly a unique trait in smartphone design. When it comes to performance, the Huawei Honor 9 does not disappoint, sporting a Kirin 960 chipset, 6GB of RAM, and EMUI 5.1.

Not only that, Huawei has thrown in the Huawei Histen sound effect, where they worked with Grammy award-winning recording producer Rainer Maillard to optimize sound quality, while partnering with Monster to create “Honor Purity,” which is a unique sound equalizer that can only be found on the Honor 9 and nowhere else. This ultra-wide 3D sound field technology will allow three customizable sound modes to be accessed for different user scenarios.