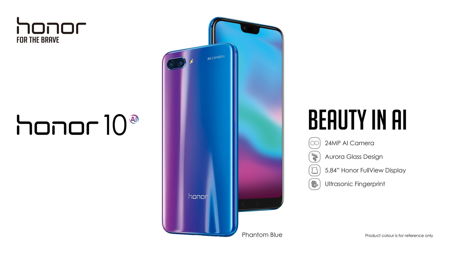 Every smartphone manufacturer would need to have a flagship device in order to showcase their technological advancements to the rest of the world. Most of the time, these are high end devices with plenty of bells and whistles, allowing it to last a good two years before it starts to get obsolete from certain aspects. Huawei’s latest attempt at a budget-oriented flagship smartphone will continue from where the Huawei Honor 9 left off, this time arriving in the form of the Huawei Honor 10.

The Honor 10 will concentrate on the idea of “Beauty in AI”, where there are two major ground-breaking and industry leading smartphone technologies in which consumers can benefit from. The first of the two would be the advanced AI 2.0 technology that is primarily applied to the smartphone’s 16MP dual-lens camera located at the back. The other would be the Honor 10 design, which arrives in a 3D glass back alongside a stunning nano-scale optical coating that is made up of 15 layers of shimmering color.

The asking price for the Honor 10 will certainly not break the bank, where it will cost £399.99 a pop as it arrives in select markets such as UK, France, Germany, Italy and Spain first before making a dash for the other markets worldwide. There will be a 24MP shooter in front for great looking selfies, and the AI for the camera is able to recognizes over 500 scenarios in 22 categories, all done in real-time so that it will be able to apply scene-specific parameters to churn out really great looking photos with but a single snap.

Apart from that, the Honor 10 carries the distinction of being the first smartphone of its kind with a front-placing ultrasonic fingerprint sensor located under the glass, covered by a 5.84-inch FullView FHD+ screen with a 19:9 bezel-less display. It has 4GB of RAM accompanied by up to 128GB of internal storage, boasting of the Honor Super Charge 5V/4.5A and a 3,400 mAh battery. Super Charge lets you juice up the Honor 10 from zero to 50% of battery power within a mere 25 minutes, now how about that? Modern day road warriors would definitely do well to consider the Honor 10 as a workhorse flagship smartphone if they are on the lookout for one.