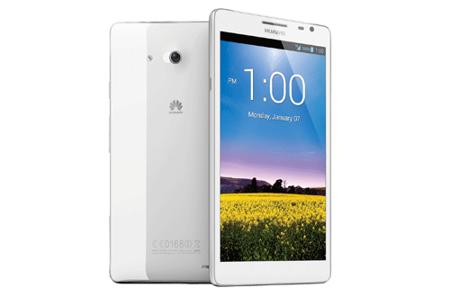 Huawei’s appearance at CES 2013 this year has yielded a trio of notable smartphones, and while we talked about one of them the other day (the Huawei Ascend W1 that ran on Windows Phone 8), here we are with the rather unique Huawei Ascend Mate. Why do we say that this is unique? Well, the next time your mate gloats over the rest of the group that his Samsung Galaxy Note 2’s 5.5” display is the bomb, all you need to do is coolly whip out the Ascend Mate and watch the rest of the gang drool over its 6.1” display. Granted, a larger screen does not necessarily translate to high resolution, which would be more or less the most obvious “flaw”, if one can say that, in the Huawei Ascend Mate.

Still, the Huawei Ascend Mate is no pushover when it comes to hardware specifications, as it is touted to run on a 1.5GHz Hi-Silicon quad-core processor with a 4050 mAh battery in tow to keep things together. The battery will work with Huawei’s proprietary Quick Power Control (QPC) and Automated Discontinuous Reception (ADRX) battery efficiency technology and fast sharing technology, allowing it to last the distance even during a day that saw full of heavy usage.

Touted to sport a screen-to-body ratio of 73%, which is currently the highest in the industry by far, it will help maximize your viewing pleasure for emails, documents, video or games. The 6.1-inch HD IPS+ LCD screen might not carry Full HD capability, but it still has a respectable resolution of 1280 x 720, while ’Magic Touch’ capability lets you use the display even when you are wearing a pair of gloves – perfect for those of us living in countries where the mercury plunges to the low negatives during winter.

There is no word on pricing at the moment, but it is rather strange to hear that Huawei will sell the Ascend Mate in China from February onwards. Perhaps they are testing the market there beforehand?