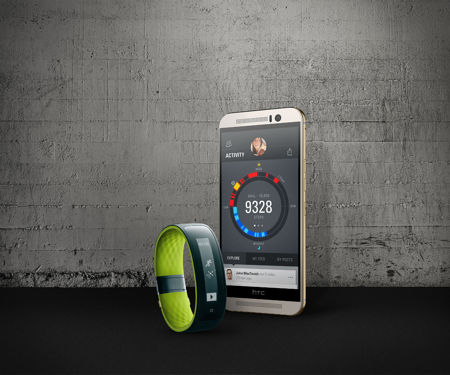 Taiwanese smartphone manufacturer HTC has just launched its GPS-enabled HTC Grip, which so happens to be a spanking new smart fitness tracker that has been specially designed for UA Record. This marks the maiden attempt by HTC to deliver its first high-performance, smart fitness tracker, where it will fuse HTC’s renowned design alongside powerful, accurate tracking across a range of sports and activities, which would then open the doors for athletes to set personal goals, before smashing them, of course.

The HTC Grip will be compatible with devices that run on the Android and iOS platforms not to mention Bluetooth-enabled accessories such as heart-rate monitors, which in turn would allow Grip to extend its functionality, while providing additional performance data to the Under Armour Connected Fitness platform.

The HTC Grip has been specially designed to comfortably support even the most extreme training regimes. It boasts of a contoured, waterproof band that will conform to your wrist without pinching your skin or catching on clothing during those intense workouts, which can be a bummer, really. Apart from that, there is a curved 1.8″ PMOLED display that also makes it easy to read time, distance and notifications while you are on the move. Expect the HTC Grip to come in three sizes, where it will ensure a perfect fit, as the HTC Grip complements even the most advanced training equipment and apparel in both style and performance.

The HTC Grip is full well capable of tracking and recording a range of workouts (from running and cycling to time spent at the gym), where it is also waterproof of course, which makes it perfect for tracking every single step, right from the gym to the shower and beyond. It will run on a 100mAh battery that is capable of lasting up to five hours whenever the integrated GPS is turned on, so that the HTC Grip is able to accurately capture route, distance, pace and calories burned, all of which will synchronize with UA Record in real time. Fitness buffs, are you interested?