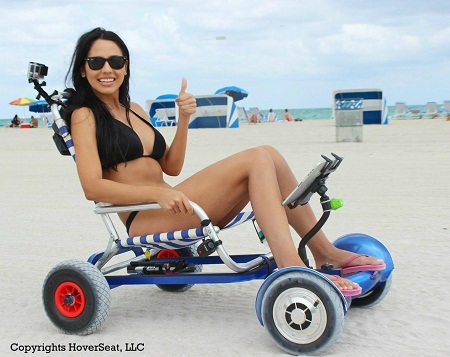 While it is completely understandable to use alternative modes of transportation to help with longer walking commutes, use of hover boards has gotten a bit ridiculous. People are on their phones going 12 miles an hour and smack into poles, zoom into oncoming traffic, and also lose out on exercise. No harm in using them for leisure now and again, but we’ve hit the tipping point with practicality for owning and using these things.

That tipping point is called the HoverSeat. This is an attachment for your hover board that will let you sit in a chair of your choosing while it drags you down the street. It would make more sense to just buy a go kart, especially if you don’t already have the vehicle in the first place. There is, of course, plenty of real-world uses for this sort of device, as the HoverSeat is merely an aluminum frame with 2 ball bearing wheels and a clamp for your two-wheeled personal transit device.

This is going to cost you $89 for the frame, and it will only work with hoverboards that have a round middle, fitting 6 and 10” around, but not 8. Not only is this a not built to pack away for easy storage, but it also weighs 11+ pounds, and will add on around $29 for shipping. Instead of buying accessories to make one item into something else, you could just buy one multi-function device instead of paying out tons of money on multiple purchases, but maybe that’s just me.