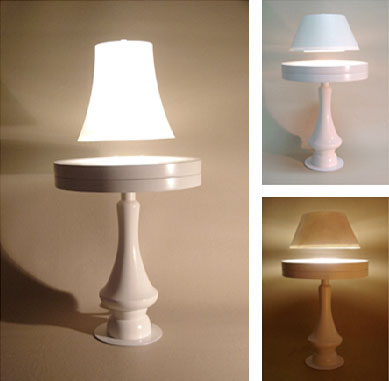 Are you someone that likes to make your house look just a little different than the ordinary home? I really don’t have to put any effort into doing that, as most people don’t have computers and gadgets lying around everywhere. Don’t get me wrong, it’s (mostly) organized, there are just a lot more gadgets about than most people have. If you’re looking to make your place stand out just a bit, you might consider adding a floating lamp to your living space.

This lamp comes to us from Crealev, which apparently has a whole line of floating objects. What is interesting is that no one outside the company knows how it works. According to their site “Crealev has discovered a new levitation concept which is able to produce a very high levitation height combined with a low power dissipation and excellent stability.” Everybody got that?

I’m sure that we can all agree that if this technology turns out to be as great as it sounds, that it should be implemented into other objects as well. You know exactly what I’m talking about: hover boards. Ever since Back to the Future came out, the masses have been crying out for such a device. Yes, I’m aware how remote that possibility may be, but a guy can hope right?