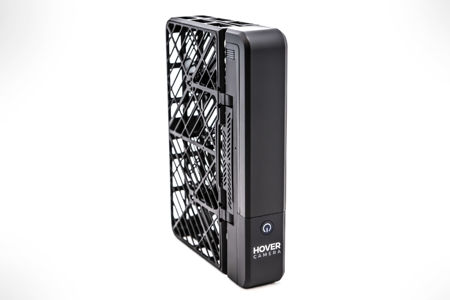 There are drones, and then there are drones. The Hover Camera would fall under the latter category which is more often than not a unique device that will be able to capture videos and photos from afar and high up, but also carries the distinction of being an autonomous flying camera. Zero Zero Robotics is the company behind the Hover Camera, which is the first truly consumer-friendly autonomous flying camera that has been specially designed to be safe and portable, and yet allowing just about anyone to effortlessly capture exciting moments indoors and out, from creative new perspectives.

This is made possible thanks to the embedded AI that will intelligently navigate its environment, assisted by the Qualcomm Snapdragon Flight drone platform. It does not matter whether the Hover Camera captures exciting moments by snapping an aerial family vacation photo, or to archive the perfect shot from above the rim at a basketball game, or even recording your wedding as you walk down the aisle, the Hover Camera will be able to get the job done with aplomb.

The Hover Camera is all the more special as well courtesy of its innovative protective, and foldable carbon fiber enclosure design, making it safe and easy to use right out of the box as there is no learning curve whatsoever required. All that you need to do is to unfold the Hover Camera and power it on, and it will lift off of your fingers, before going about doing its stuff – capturing thrilling video and photos from unique angles as it hovers steadily in place.

As for the hardware specifications of the Hover Camera, they include the ability to capture 13MP photos and 4K videos for posterity, with the capability to track your face and body so that it can always keep you in the picture, even while you are on the move. Shaky moments are a thing of the past thanks to Electronic Image Stabilization as proprietary technology intelligently and digitally stabilizes photos and video, correcting camera shakes or jitters from the final footage.

Tipping the scales at just 238 grams, it is below the FAA 250 gram Hobbyist Drone Registration weight limit, and can spin while in a fixed position to capture 360 degrees of panoramic video footage. Anyone interested?