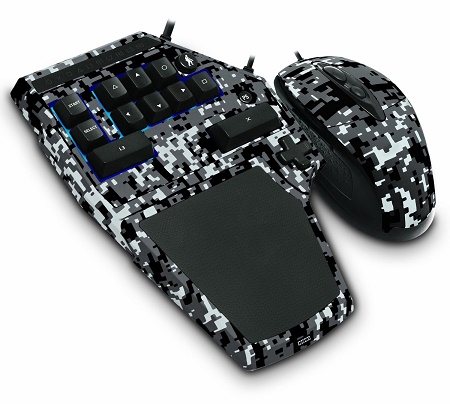 Just because new consoles come out doesn’t mean we don’t still play games on older systems. There are a bunch of us who are still looking for ways to play cartridges on updated systems just so we can live out our nostalgia a little better. While the PS3 is not an ancient system by any means, some prefer to keep gaming on a system they already have, with games they already have.

If you happen to still be playing FPS games on the PS3, but know the joys of playing PC games of this genre with a mouse and keyboard, you know that a regular ole PS3 controller is going to put you at a disadvantage. The response time isn’t quick enough, and moving an analog stick isn’t quite as precise as a mouse. If you’d prefer to change to mouse and keys for the PS3, there’s always the HORI PS3 Tactical Assault Commander 3.

This is black, gray and white camouflage, likely meant to fit in with all of the army-theme shooters you would be playing. The keys and mouse buttons are programmable to fit your specifications, and you can adjust the mouse’s sensitivity. There’s also backlighting to see what your fingers are ambling at. This is no cheap trinket at around $63, though seeing that it is said not to work on PC or PS4, it’s a very niche product for a very specific audience.