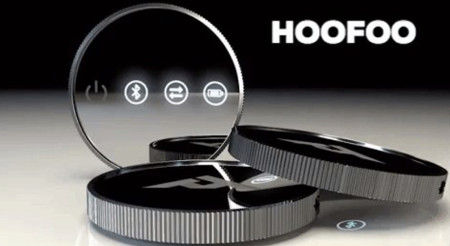 Cryptocurrency is all the rage these days, considering the amount of security and anonymity attached to it. One who is interested to explore the world of Bitcoin can look forward to Hoofoo, which is actually touted to be the very first hack-proof Bitcoin wallet in the whole world when it comes to iOS and Android-powered smartphones. After all, with the sudden surge in price for Bitcoin, it is imperative that Bitcoins should be kept secure, and HooFoo is able to do its bit to help through such an awesome multi-crypto hardware wallet.

At first glance, folks might figure out that the HooFoo is actually a stylish minted coin which can be carried by virtually anyone in their own wallet. However, those with a penchant for sleuthing and curiosity would discover that this is actually a very small waterproof coin that comes jam-packed with the world’s most secure crypto chip, a fingerprint/facial authentication system, and a 4.0 Bluetooth connection that allows it to pair up with the latest compatible smartphones.

Chadrick, the founder of HooFoo, shared, “Hoofoo is the most game-changing device ever invented for the cryptocurrency world. It is a hack-proof hardware wallet that pairs up with your smartphone. It can pair up with any phone and be used to store an unlimited amount of multiple cryptocurrencies such as Bitcoin, Ethereum, and Litecoin. Till this date, no hardware wallet has been released for iOS phones until Hoofoo; therefore wallets have been both insecure and inconvenient in the past.”

Apart from the hardware structure itself that is USB-free, HooFoo would rely on the far harder to penetrate Bluetooth connection. It also comes with a face and a fingerprint authentication system within the app that is synchronized to the hardware in order to make sure nobody is able to access your key. This is certainly no ordinary wallet, that is for sure!