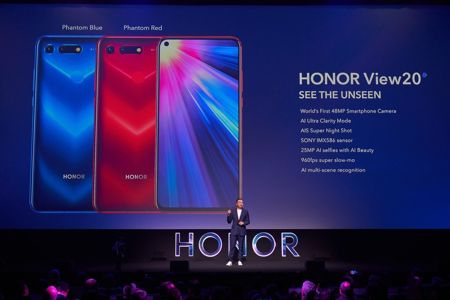 The world of smartphones is a fascinating one, where trends tend to shift quickly from one to another. Huawei has slowly but surely moved up the food chain over the years, and have made their presence in the smartphone world felt yet again with the reveal of the Honor View20, setting new standards with many different kinds of first technologies packed underneath the hood. For starters, there is a 48MP camera at the back, a 25MP in-screen front camera, a 7nm Kirin 980 AI chipset, an AI Triple-Antenna Wi-Fi technology and the aurora nanotexture design, where all of these have never made their presence felt in a smartphone before.

We all know that having more megapixels in a camera does not automatically translate to a superior photo, but Huawei intends to change that perception with the Sony IMX586 48MP sensor that has a 1/2-inch CMOS which is equivalent to 1.6μm pixels in Quad Bayer array. When this sensor works alongside the Kirin 980 chipset, the 48MP AI Ultra Clarity mode will help produce photos that sport unmatched detail and clarity. It is capable of snapping several 48MP pictures simultaneously before collating the best details from each photo in order to create the perfect 48MP picture. Using the Kirin 980’s dual-NPU, it will process the photo via an advanced AI algorithm quickly.

There is also another rear 3D camera that will help create a new dimension in photography and videography for a greater degree of usability and fun. This 3D camera picks up information on various shapes of objects based upon the time-of-flight of light signals, enabling depth sensing, skeletal tracking and real-time motion capture. As for the advanced in-screen front camera design, you end up with a notch-less viewing experience alongside a 91.8% screen-to-touch panel ratio.

Other hardware specifications include 6GB of RAM and 128GB of internal memory, where it will arrive in Midnight Black and Sapphire Blue colors with an asking price of 569 Euros, automatically placing this handset into the high end market.