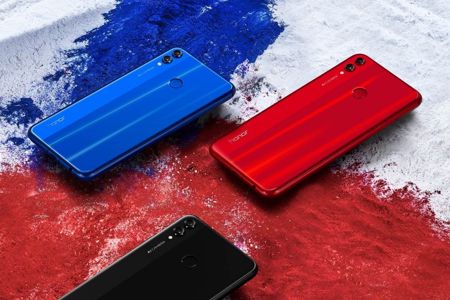 Huawei has certainly come a long way in terms of smartphones since its early days, and it was one of the first companies to work with dedicated imaging company Leica by incorporating a Leica lens into its handset. Their X-series line-up of smartphones has just seen another addition in the form of the Honor 8X, a mid-range smartphone that intends to provide plenty of value for your hard earned money without sacrificing on performance and style. Keeping in line with the trend of introducing a notch on its display, the Honor 8X sports a 91% screen-to-body-ratio and chip-on-film (COF) technology, among others.

Huawei understands that not everyone is able to afford an expensive flagship handset, and yet require the necessary amount of juice while they are on the road. This is where the Honor 8X fulfills both criteria brilliantly, featuring a metal middle frame that is equipped with advanced COF technology and a patented antenna design, all the while sporting a 2.5D double texture aurora glass body with a grating effect. You can pick from blue, black and red color choices.

It also boasts of powerful AI cameras that deliver breathtaking super night shooting capability, courtesy of its dual-lens 20MP and 2MP rear shooters, while selfie lovers will definitely find the front-facing 16MP cameras a boon. These cameras possess AI which recognizes 22 different categories and 500 scenarios in real-time, as the AI technology optimizes camera settings and enhances photo quality based on what users are shooting. In the new night shooting mode, blurring that used to be the hallmark of such shots are eliminated under a maximum 6-second exposure, never mind that you have a shaky hand.

Powered by the octa-core Kirin 710 chipsets, you will find that the Honor 8X is not lacking in any way, as it has the Mali G51 GPU accompanying it to deliver an increased performance by 130% compared to the previous generation. It will also feature 128GB of integrated memory that can be further augmented via a microSD memory card slot, while the 3750mAh battery should be able to last you throughout the entire day without missing a beat. Expect the Honor 8X to retail from 249.90 Euros all the way to 299.90 Euros, depending on the model that you pick.