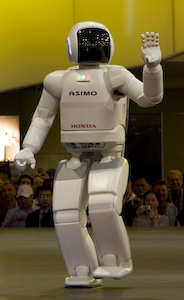 You have to admire a company that can continue a research program over 20 years and countless millions of dollars. A research program with the far reaching aim of mimicing human motion in robotic form. It was science fiction when they started it and it’s getting closer to science fact with every new revision.

So what is Asimo? It’s a robot modelled after a human being. Unlike sony’s qrio, which was an excuse for technology research, Honda are giving every impression that they really want to develop Asimo into a viable product. Not this year of course and probably not for another ten, but Honda’s show was full of references as to how an Asimo type of design can help people in their daily lives.

Honda have deliberately made Asimo “cute” and it’s distrubingly easy to empathise with it which is an important part of the design philosophy. If your new home help looks cute and friendly you’re more likely to trust it I guess.

So what’s new? To start with Asimo can now run at 6 kph. In fact, given that it’s a robot it can probably run at 6kph until its power runs out so it’s already more mobile than this writer in that respect:-)

We saw Asimo kicking a ball, balancing on one foot and climbing up and down stairs, all of which are impressive leaps in robotic technology. 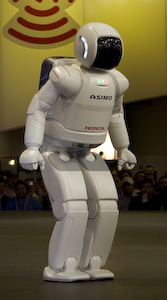 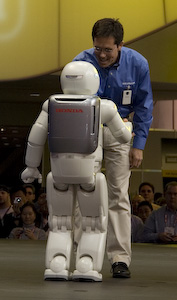 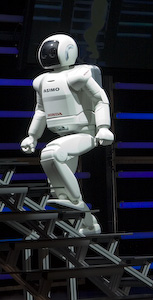 Photos are good, but to show this off properly you really need video. Shiny Shiny were there with a camcorder though so the following clip comes from them.