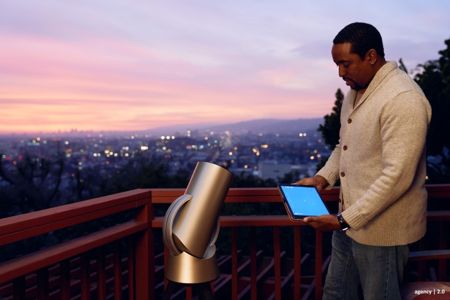 While there are other “telescopes” that we have seen in the past, those cannot hold a candle to what Hiuni offers. In fact, what has been released before are nothing more than mere toys in comparison, including zoom telescopes for a mobile phone camera. The Hiuni? Well, it is a smart interactive telescope that will target astronomy enthusiasts and newcomers alike. This Hiuni telescope will work with an app, allowing it to provide an interactive Dual Live View of the night sky as it automatically positions itself according to the constellations, stars and planets that you as the stargazer choose. Such a hands-free approach will enable continuous auto adjustment of the telescope’s alignment based on location as well as the earth’s rotation for optimal viewing.

Available on Kickstarter for $489 apiece, it might sound expensive, but actually it is not as that would be 59% off the recommended retail price. Needless to say, folks who decide to back up the Hiuni telescope will be one of the first few to pick it up as it begins to ship in early 2019.

Hiuni will feature an interactive app that is available for both iOS and Android platforms, as it engages with kids and adults alike using STEM principles. Not only that, there will be other subjects such as science and astronomy that will hopefully ignite the curiosity of one via discovery and exploration. The telescope is certainly reimagined with the Hiuni, as it replaces the traditional eyepieces with double image sensors in order to deliver in-app enhanced live views which will pave the way for observation with family and friends simultaneously.

The app itself boasts of additional educational content (video, images, audio), interactivity (discovery, story modes, tours), challenges (badges, mini-games, unlockable content) and others, helping to make the stargazing experience far more interactive. Evoke that sense of wonder you had as a child as you looked up to the night sky once again with the Hiuni telescope.