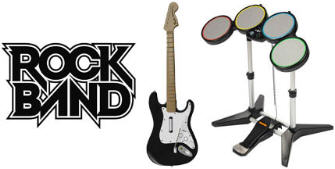 Letting gamers go beyond air guitar to fulfill their rock n’ roll fantasy, MTVs Rock Band ups the ante over Guitar Hero by including master lead guitar, drums, and a microphone for vocals to get both your grove and your game on. Very similar to Guitar Hero, the band can not only master recordings from legendary artists, they can do it in career and world tour modes. 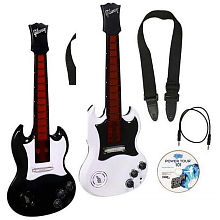 If your kid wants to go beyond 5 buttons and game play to grinding with a real axe with real music, the Power Tour Guitar Les Paul edition may be the perfect way for him/her to learn. The Power Tour Guitar uses lights, rather than strings, to teach the user how to play several legendary classic rock songs. The lights flash indicating where to place fingers and strumming actually plays the tune digitally. Hook it up to the optional amp and you’re ready to rock n’ roll! 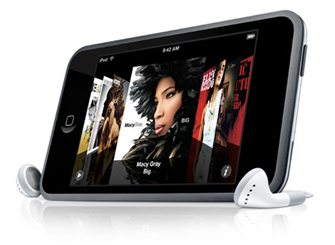 No surprise here. With the ability to play mp3s and enjoy videos on it’s new widescreen multitouch LCD, it’s become a must for just about anyone who listens to digital music. Comes in both 8GB and 16GB models. It’s WiFi capability also allows users to purchase music through the WiFi iTunes Music store. For younger kids, the Classic iPod Nano is an equally tempting device, though much smaller. 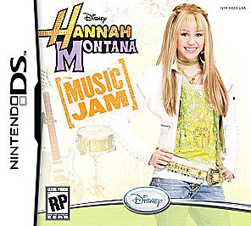 If your girls have a Nintendo DS, who said they can’t have it all? Disney’s new Hannah Montana Music Jam for DS allows players to live the fantasy of either being Hanna Montana or her alter ego Miley. The cool DS interface transforms into either a guitar, bass guitar, or drums. And it’s wired interface allows multiple players to network and jam together. Users can also produce music videos, complete with backdrop shots from multiple angles, and invade Hannah’s coveted walk in closet to customize Hannah’s outfit, including hair, glasses, tops, and bottoms.
Who said you can’t have it all? 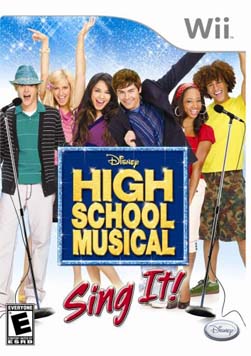 Fans of the phenomenally successful High School Musical can now get their head in the game with Disney’s High School Musical: Sing it! Video game for PS2,
Players can not only learn the fun choreography from the original movie’s dance routines, they can also become their favorite characters (Troy, Gabriella, Sharpay, Ryan, Chad or Taylor). There are two play modes: Story and Party. In Story Mode, players use song and dance to perform High School Musical and High School Musical 2 songs, from Start of Something New to We’re All in this Together, solo or as a duet. But in Party mode, the game is on as users compete against one another player. Includes microphone. 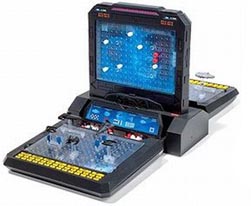 Long, long ago in a galaxy far, far away, the popular game “Battleship” went high tech with an electronic edition. This year, it’s out of this world with the The Star Wars® Electronic Battleship® Game. An exciting edition of a classic board game, this electronic version evokes the sounds and images of Star Wars® in four different strategy games, including solo play and player-to-player challenge. The system guides players through the different games with digitized voice commands, while the distinctive sound of ion cannons, concussion missiles, and proton torpedoes signal salvo launches as players try to knock out their opponent’s Star Destroyers, X-Wing Fighters, Millenium Falcon, and other iconic ships from the movie series. 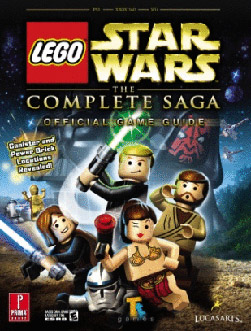 Another great game that mixes the fun of Legos with the saga of Star Wars, this third game in the trilogy allows gamers to play through the events of all 6 Star Wars movies. And don’t’ think that this is yet another escapist video game. In the Star Wars universe, everyone is a padawan learn as they work to solve puzzles that encourage creative thinking through the use of teamwork and unique building situations. There are new characters as well, giving players over 160 classic Star Wars charactes to choose from, or create your own with the upgraded Character Customizer. There are Enhanced Force powers; new power-ups; new Challenge mode; and revamped levels. And the Wii version provides motion-sensitive inputs for exciting new ways to control the LEGO Star Wars characters – especially when the rumored official Lightsaber Wii controller comes out next year. Comes for Xbox, Wii, and PS 3.
Cost : $50 (and well worth it) 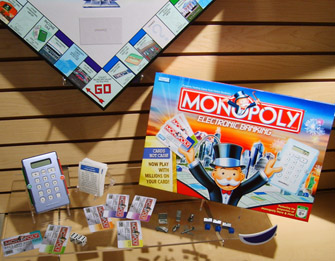 The most popular board game ever gets a hiTech upgrade in Monopoly Electronic Banking edition. The goals are still the same, but the way gamers spend their money has gotten more convenient thanks to a banking card system which credits and/or debits a player’s account, rather than dealing with cash money. Players still operate with money, learn real-world economics, competition and strategy, try to stay out of jail, and try their best to get filthy rich.
Cost : $75 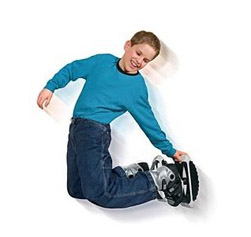 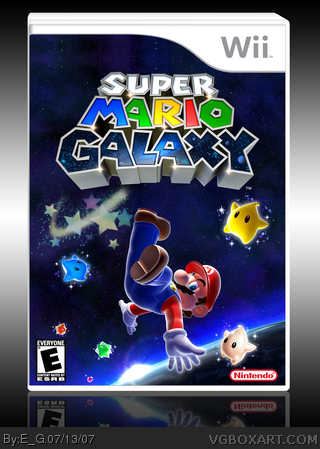 Travelling all across the galaxy while surfing on a ray in an ocean in the clouds, rolling a ball through a treacherous garden, or floating in a bubble over a poisonous swamp (and all as you travel from planet to planet bending the rules of gravity) Super Mario Galaxy is making gamers rethink the experience and may be becoming the greatest video game ever while doing it.

Looking for other people to buy for, check out our other 2007 Christmas Gadget Gift Guides.