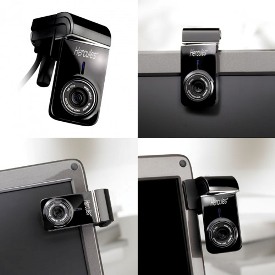 It would appear that Microsoft isn’t the only one who is making new 720p webcams, as Hercules has announced the Dualpix HD 720p.

As for photo resolution, it has 5 megapixels in interpolated mode, and it has a 1 megapixel CMOS sensor for quality images, even in low-light conditions. There is also a high-quality built-in microphone for good sound as well.

The Autofocus lens allows a wide viewing angle, which is, according to my source: “Awesome! Now you can be seen from head to toe”.

There is only one problem. Both Microsoft and Hercules are claiming that they have the first webcam that operates at 720p. Microsoft is saying the Lifecam is the first, but all I got to say is this: webcams have come a long way from the low-res, low frame rate things they were a while ago.

Well, I believe that the first 720p webcam to hit the market can claim that one, and the Hercules Dualpix HD720p will be out next month for $60.