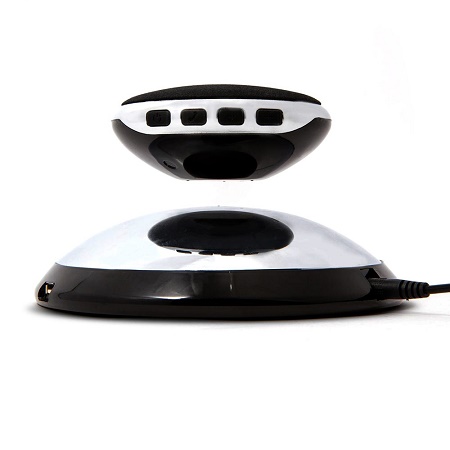 Levitating speakers are not new to us, but that doesn’t make them any less cool. As it is with all gadgets we see on here, there are a variety of similar products that change slightly in usage. This makes it possible for several companies to churn out basically the same thing at a lower or higher price based on their build and functionality. When you see something cool like a speaker that is held up by magnets, you can be sure many more like it will follow shortly.

You’ll be hard-pressed to find a levitating speaker more nifty than the Mars, but if $249 is outside of your price range (what it currently runs for), then maybe the Helium Levitate Speaker will be more to your liking. It houses a 3 watt speaker, and as there are powerful magnets inside, you can attach it to anything metal. You can connect your Bluetooth music players to it, or use the aux cable to hook in. The exterior is glossy, and the rounded edges make it look like a UFO landing on a hill.

This only has a playback time of 5 hours, which isn’t much if you’ve got a full day planned. This is the cheaper option out of the levitating speakers out there though, so it shouldn’t be too surprising. If you’re wanting a better internal battery, you might want to go for the OOM, though that will be $179 compared the $125 the Helium would cost you. The speaker aspect is portable, and can also be used to take calls on speakerphone thanks to a built-in mic. You will need to have the based plugged in, but there will be a separate cable for the speaker as it charges via USB.

Available for purchase on Red5