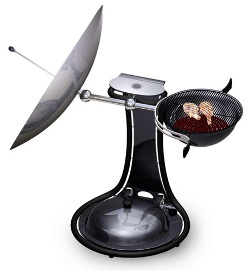 In an effort to use renewable energy sources and less polluting products, I’m surprised that I never see barbecues being targeted. Everyone always thinks of cars or big industrial factories as the ones that leave the huge carbon footprint, but no one thinks about grilling. I mean, if you’re burning something, that smoke has to go somewhere. And I’m certain that propane is some sort of pollutant because it smells so funny.

Designer Sean McGreevy has addressed this issue with the Helios, an energy-efficient outdoor cooker. The dish that you see is not designed to pick up 400 stations, but for collecting solar energy. The solar dish, which is safely pointed away from you while cooking, is designed to heat a coil inside the barbeque and cook food.

Of course, what if you want to barbecue at night? Well, if the sun is not out for whatever reason, the user can always rely on electrical power. The Helios has a retractable plug that is stored in the base.

Unfortunately, this Helios is just a concept in its present form. Once it gets developed, the days of the Weber are over. Yes, the Helios is the barbecuing wave of the future!