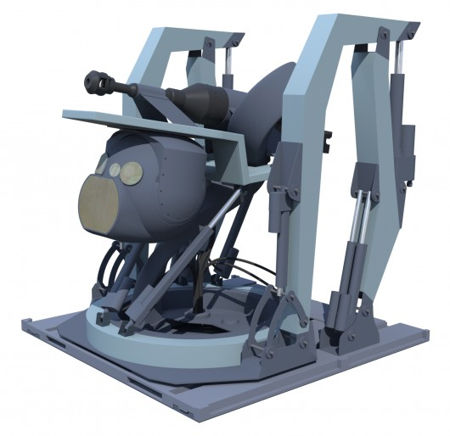 Normally, we would not touch weapons over here at Coolest Gadgets but this particular one is way too good to pass up. I am referring to Israel-based Duke Airborne Systems’ Robotic Weapon System (RWS). The Robotic Weapon System was first unveiled over at the Eurosatory defense industry show in Paris, where this particular system was touted to be a “first-of-its-kind” system by virtue of being a concealable robotic gunnery module that enables utility helicopters to fly into hostile territory without the need for an armed escort. This would definitely help solve some logistical nightmares, as well as free up resources elsewhere.

The Duke RWS happens to be a land-based gunnery system which was specially adapted to play nice in helicopters. It is made out of light aerospace materials, being designed to be installed in a standard utility helicopter without the need for any kind of structural changes to be made to the aircraft. Duke is proud to say that this particular modular kit will take up a mere 33% of the cargo space next to the door, which means there is still room for up to a dozen fully-armed soldiers.

The main focus of the RWS happens to be its electric 25mm machine gun that has up to 2,000 rounds, and these rounds will include bursting, armor-piercing, and air-burst munitions. Whenever the machine gun remains inactive, it will fully retract into the helicopter, which translates to the elimination of drag, not to mention allowing one to hold their proverbial cards close to the chest since the enemy will not be able to gauge the relative firepower available. This particular gun has been mounted on a 7-axis robotic system which will compensate for helicopter movement and vibration, all the while offering 360-degree firing capability.

Other features of this gun in the RWS include a multi-spectral vision system for day/night operations as well as automatic target tracking. Not only that, there are also integrated gunfire-locating sensors to let you figure out where the source of the weapon fire hails from in order to dish out suppressing fire yourself.