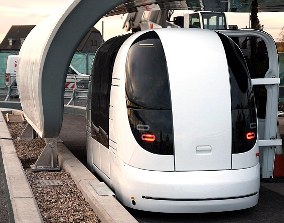 Have you ever noticed that airports always have the coolest systems of mass-transit? I suppose when your baggage claim, as well as departure and arrival gates are miles away, you probably have to. Practically every airport I have been to involved a ride on its own personalized subway train.

Heathrow airport of London has recently added its own mass-transit system, but this is more of an exhibit or ride for the Science Museum of London, rather than a way of helping passengers. However, it could easily be a model of the future of mass-transit, which would hopefully be an age full of driverless vehicles.

These Personal Rapid Transport (PRT) vehicles have their own special track that is narrower than a normal road. They are good for four passengers, and controlled by a touchscreen that allows them to set their destination. From there, they sit back while the automated vehicle cruises at an average speed of 25 mph, without any fear of accidents.

Sounds pretty futuristic, doesn’t it? Oh, it is. It requires ahead-of-their-time thinkers to come up with these PRTs. Fortunately, the design team had a little help from Mark Lowson, who is one of the original designers of the Saturn rocket for the Apollo missions.