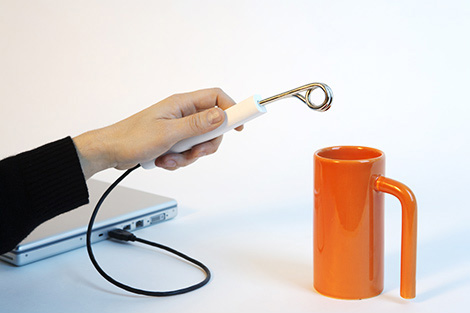 Here’s one of the many problems about corporate jobs. You work in a small cubicle in the middle of a sardine packed high-rise so the coffee machine is no doubt a few minutes away from your small work space. So by the time you get back to your desk after the long trek from the coffee machine, your caffeinated beverage is left luke warm. That’s just no way to live.

The ingenious Heat Me is a great little USB gadget which acts as both a beverage stirrer and a liquid heating device. Just plug the Heat Me into your computers USB port and the metal coil will heat up for optimal coffee heating power.

One thing you should watch out for though is we imagine the Heat Me gets pretty toasty. And unless you have the same sort of Milton-mentality then the character from Office Space, you probably don’t think it’s a great career choice to burn down your building.

As far as we can tell, the Heat Me is no more than a conceptual pipe dream for the time being. Though we’ve seen in the past that the most ingenious ideas often times get scooped up or copied by gadget stores, so here’s hoping that Heat Me gets the credit it’s due. Dammit, my coffee is cold now! Make this damn thing!