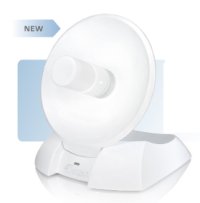 Hawking Technologies has recently announced that it will begin to ship the first Wireless-300N WiFi Networking Adapter which sees an integration of second generation Dual Antenna Dish Technology for extreme WiFi performance. Shaped after a miniature satellite dish, the wireless adapter features a Hi-Gain dual-antenna feed design which is capable of boosting WiFi distances by up to 600% in comparison to standard embedded applications. I guess the folks at Hawking Technologies got it spot on when they remarked, “The problem with wireless networks these days is not the speed, it’s the distance. Regardless of how fast your network is, if you can’t reach the wireless signal, it simply won’t work. We understand this at Hawking and are very excited to announce the release of the HWDN1 Hi-Gain Wireless-300N Dish Adapter. Our second generation Dual Antenna Dish Technology builds from our very successful Wireless-G Dish antenna design and boosts the performance in both speed and range. The result is the most powerful 802.11n USB network adapter on the market.”

The HWDN1 Hi-Gain USB Wireless-300N Dish Adapter is currently available and will retail for approximately $99.99.