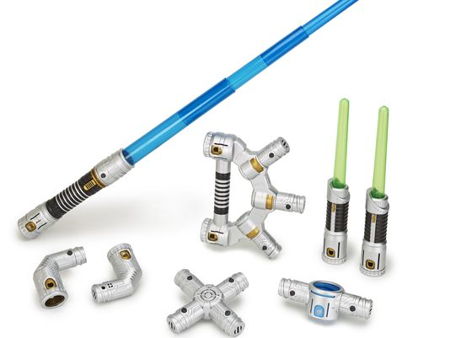 When it comes to milking a particular franchise for all that it is worth, it would be pretty difficult to top Star Wars. There are just way too many collectibles associated with this particular franchise, so much so that you would have to be a very rich person (with plenty of storage space around, I might have to add), to be able to own the entire collection, from toys to trading cards to collector’s edition of the movie, not to mention clothing and LEGO pieces, even. Well, Hasbro has decided that it is time to milk the proverbial cow yet again with the new Master Jedi Kit.

If you thought that the spanking new lightsaber as unveiled in the Star Wars Episode 7 trailer was something extraordinary, wait until you check out Hasbro’s new customizable lightsaber toys. These are modular kits – which sport a slew of different components, so much so that you are able to configure them in dozens of different methods. Hasbro’s Jedi Master set will have a going rate of approximately $50, where it sports a standard lightsaber with the trappings of lights and sounds, of course, a pair of lightdaggers (how about placing them in your boots?) as well as a bunch of other random connectors that lets your imagination go wild. If you would like to have a Star Wars/TMNT crossover, it would not be a problem to concoct a lightsaber sai, too, now how about that?