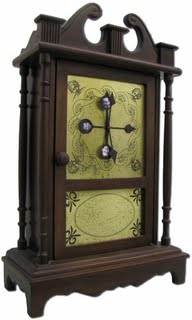 The scene was Harry waking up in the Weasley’s tree house, and Harry sees this odd clock with Ron and two of his brothers’ faces on the hands. They are pointing at the place where they are.

It would appear that someone has designed a Weasley Whereabouts clock that actually works. It works with the magic of Twitter. All you need to do is tweet your location, and the supposed magical arrow will point to where you are. Assuming that you have put it on the face of the magic clock, of course.

It reminds me of this sign I used to have on my dorm room door in my college years. It said: “Mark is”, and then an arrow would point to places like the cafeteria, class, or home. A lot of people had something like this. But it was not controlled by magic or Twitter, it was just someone adjusting it on their way out, assuming they remembered to do so.

This is just some guy’s DIY project, but you would think that someone would actually invent this thing. Perhaps it will capitalize on the money made with the last two-part Harry Potter movie.