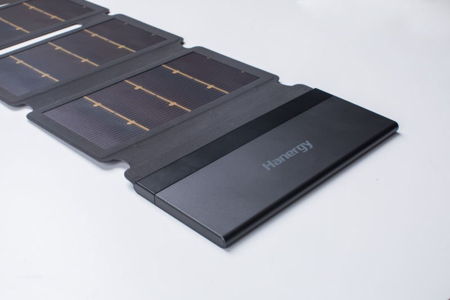 When it comes to clean energy, many of us would love the idea of having a virtually inexhaustible supply of energy which is free and plentiful. That would certainly get gadget lovers’ adrenaline running: imagine being able to play with your smartphone all day long without having to worry about it running out of juice simply because you have the means to keep it powered up to maximum at all times, for free! Hanergy figured out the next best thing, a new generation mobile energy solutions that arrives in the form of a thin-film solar charging pack. This is an on-the-go electricity generator and storage device, where it boasts of thin film solar panels that provides an avenue for on-the-go charging when it comes to personal electronics.

When it concerns the physical design, Hanergy’s thin-film solar charging pack will arrive with an accent of high-tech while featuring three choice colors to pick from: Digital Grey, Gem Gold and Lady Rouge. This free-folding thin-film solar charging pack is lightweight enough so that users will be able to enjoy all of its convenient features including “one-grip to go”.

In addition, this thin-film solar charging pack can hook up to multiple devices sans any wires, and it has even been designed to meet aviation management requirements, which means you can bring it with you on your next commercial flight. However, I believe that some airport personnel who might not be too informed would question the suitability of this device, which would make it a rather risky proposition as a hand-carry option.