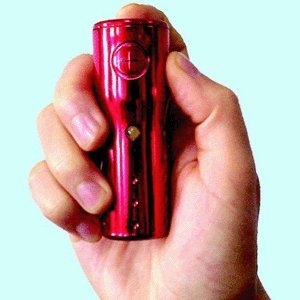 I live in New York City, so I guess I am used to being pretty vigilant about my personal safety. I mean, you never just walk down the street in the big city and not pay attention to whats going on around you. And lets face it, what’s going on around you isn’t always good.

Actually, we have reached a point in our society where we all need to be just a bit more careful, but what are our options? Well, the Handheld Attack-Dvr offers one you may not have heard of. When made active, the Attack DVR will produce a blinding led light as well as a piercing 90 plus decibel noise, all while recording video at the same time. Thats right, a witness to the crime scene hidden in a unit that looks like pepper spray.

The unit is small enough to be held discreetly in your hand or attached to a keychain. It records audio and color video, emits a blinding light and a loud sound that can easily attract attention or scare off a potential attacker. Equipped with a  built in rechargeable battery and a video resolution of 640 x 480 the Attack DVR supports up to a 32Gb SD card.

I have to be honest and say I’d feel better about it if it shot real bullets, but I’m funny like that.