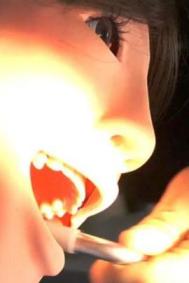 I recently had my mouth examined by a dentist, and I was fortunate to get one with years of experience. I always wondered who are the patients for the starting dentist.

Fortunately, the dentist-in-training will have more at his disposal than a frightened grin with this 5-foot tall Japanese robot developed by Showa University and robot maker Tmsuk. This robot, named Hanako Showa, has very realistic movements of its eyes, head, and tongue. It even has a place for saliva, so its mouth will have to be sucked out just like a real patient.

Hanako can also behave in a realistic way such as saying “Ouch! It hurts!” and turning its head. I can only assume that the novice dentist must apply some fake Novocaine. Then the dentist can ask the patient “are you OK?” I am assuming the robot will respond affirmatively if you’re doing it right.

By the way, Hanako will produce a vomit response if the dentist touches her uvula, and I’m told touching her robot breasts is also a big no-no. I don’t really know what it will do if you accidentally brush up against her…anyway, I guess it teaches future dentists to be sensitive to female patients.

Apparently, over ninety students at Showa University have performed examinations on Hanako. The developers plan on making many Hanakos, and selling them to dental schools.