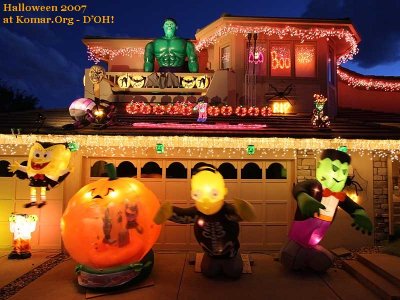 My friend Alek has again created an insane user controllable Halloween decoration display, this year you are able to control thousands of lights and inflate pumkins, Homer and Frankenstein. You can also display your own text messages on the web cam. If you’re getting ready for Halloween here’s a crazy collection of gadgets you might be interested in (though not as crazy as Alek’s front yard). 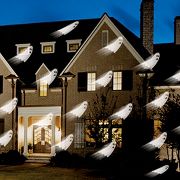 This gadget lets you project flying images on to your house, it comes with various slides so it’s not just for Halloween. Slides include deer, stars, balloons, skaters, witches, snow flakes, bats, and ghosts.

The weatherproof outdoor projector is available for $89.95.

We wrote about this gruesome door knocker last year.

I think if you ever didn’t want people showing up at your house and disturbing you, this gadget would do the trick. The Stranger Door Knocker is an old-fashioned looking door knocker with part of an arm hanging from it.

The knocker is fastened to your door with a suction cup and features a motion sensor that detects anyone approaching your door. When the sensor notices motion within a certain distance, the remainder of the arm begins knocking on the door. I think after seeing that I might not want to stick around to see what kind of person lives inside! 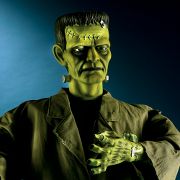 Animated Frankenstein
The hulk isn’t the only green monster.

This is the 5′ tall animated figure of the cinematic vision of Frankensteins monster that moves its arms, twists its hips, and plays music from the integral speaker in its base when activated by its internal motion detector. 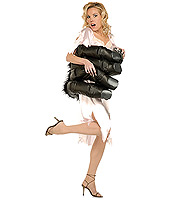 King Kong Hand Dress
If you’re off to a Halloween fancy dress party here’s a great costume for the ladies, the King Kong Hand And Dress.

Recreate one of the most famous scenes in cinema history with this dress and giant inflatable King Kong hand!
You’ll have to find your own way to the top of the Empire state building though! 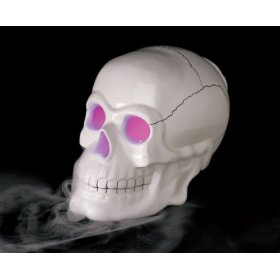 Mist Making Skull
I think this looks more tacky than scary but still.

Create a spooky atmosphere for your haunted house with this spooky skull. The creepy mist will churn out, and a ghostly aura will begin to descend onto your living room.

You can buy the mist making skull from Amazon for $29.99. 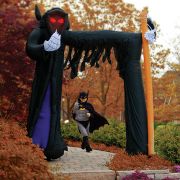 This oversized display inflates in two minutes with its built-in air pump that maintains the proper air pressure during use, and when fully-inflated, stands with a gesture that beckons guests to pass beneath its outstretched arm holding a scythe. Internal lights give the figure an unearthly glow, complete with gleaming red eyes that pierce the blackness of its hood.

The archway costs $89.95, again from Hammacher.

We are going to show you toys and gifts for every occasion, that a four-year-old boy will absolutely fall in love with. Our list covers plenty of popular toys that have a proven track record and help you finish your gift/shopping list.

After looking at a wide range of products on the market we sourced our list of the best toys and gifts for five-year-old boys. If you are still looking for a birthday or Christmas gift, we got you covered!

We have searched the internet for toys and birthday gifts that any six-year-old boy would love to play with. Our lists covers everything, from Hot Wheels to Lego.

1 thought on “Halloween Gadgets and Decorations”