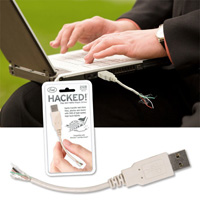 Some of you readers are hesitant to use USB drives for sensitive data. And rightfully so. Small enough to be easily misplaced and a little too likely to end up in the wrong hands, USB drives which aren’t securely protected through passwords or other encryption just aren’t for the paranoid.

We’d feel a lot more safe knowing that no one in their right mind would even think about stealing our USB drive. The Hacked! drive, designed by Windell Oskay is one piece of storage which no sane person would take a second glance at. other than out of sheer curiosity.

Designed to resemble a USB cable which has been slashed beyond repair, including dangling wires and tattered edges, Hacked! is a actually a 2 GB USB drive. Despite looking like a piece of junk that should be laying in a landfill somewhere, preferably hundreds of miles away from sympathetic geeky eyes, Hacked! might be the most efficient method of data security available.

Think about it. Who’s going to steal a gadget which looks like nothing more than a slashed cable? Other than the most hardcore of kleptomaniacs, the Hacked! gadget should remain safe from dirty fingers. Feel free to include any sort of sensitive info you desire.