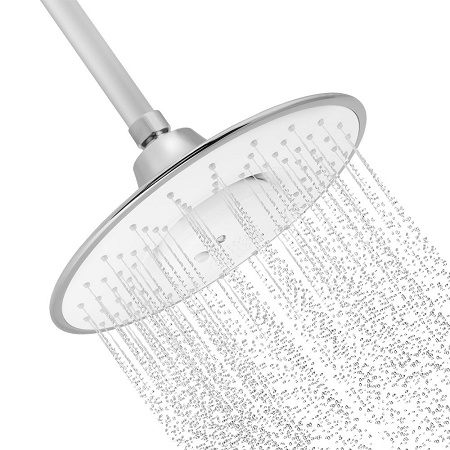 There are two types of people who take showers. Some like to take the time to think about the coming day and all they’ll need to do, and others rock out to tunes, singing loudly enough for their neighbors to hear. Most of the time we just rely on our smartphones as a speaker, but it’s always on the other side of the shower curtain, and sounds muffled.

If you want a shower speaker that isn’t going to break or short out on you after a few uses, then this H2O Vibe Showerhead with a wireless Bluetooth speaker might do the trick. It has a very wide head at which the center of is the wireless speaker which is detachable. It can not only play audio, but also also will allow you to take calls, which certainly won’t lead to any awkward situations.

Since you’re only replacing the showerhead, there’s no fancy installation to worry about, and it will only take a few minutes to put on. The speaker has a battery life of 8 hours, though you hopefully won’t be sitting in the bath or a shower for that long. It does need to be charged, but if you’re only using it in the bathroom, then it should last for a week or so. This is currently insanely cheap from its list price of $179.99, as it is currently available for $42 (for Prime peeps).