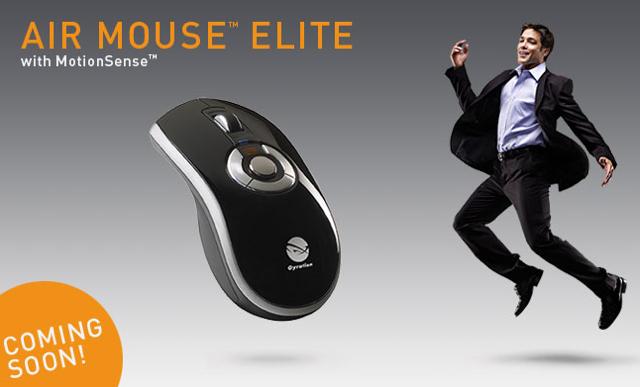 Some of you might have Logitech’s MX Air, a mouse that can use used as a motion controlled pointer, perfect for giving presentations.

Hopefully, you have heard of Gyration, a company that has done motion controlled mice way before the Wiimote was a gleam in Nintendo’s eye.

Gyration’s Air Mouse Elite is different from other motion controlled mice, because it can be used on the air and land. That is, it is an air mouse and a normal mouse on the table. That is a feature that comes in handy, because sometimes I don’t want my mouse in the air, and I’m fine with “grounding” it every once in a while.

I believe the predecessor had this ability, but the Elite has some additional buttons below the scroll wheel in a circular pattern. The former version of this product also had “motion tools” that can recognize gestures.

In short, I suggest trying out Gyration’s Air Mouse Elite. As you can see from the photo, it will retail for about $99.99, or the mouse and keyboard package for about $149.99.

By the way, if you want to make yourself a low-budget air mouse, you could just get yourself a Bluetooth key and a Wiimote. I haven’t tried it, but I’m told that it works.