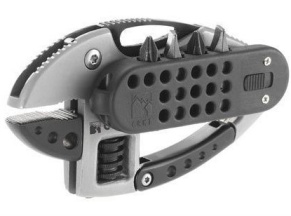 We have reported on the Lil Guppie before, and I suppose that this is the next step up, the Guppie. Actually, I think that this Guppie is the same as the Lil Guppie, just like Lil Bow Wow is the same as Bow Wow. (Oh, why do those young rappers put Lil in front of their names? Don’t they know that they will grow out of the Lil?)

This Guppie is one tool that I would have in my pocket, possibly the only one as it has literally everything you might need, except some kind of electric drill. The Guppie has an adjustable wrench with the crescent wrench adjuster worm gear. It also has a flip-out knife, and an LED flashlight, but I don’t see it in my picture. Did I mention the beer bottle opener? It’s got one, and I’m guessing its by its weird flip-up handle.

It also has a screwdriver with some magnetic heads, and the user can add his or her own.

All in all, the Guppie is the one multi-tool to rule them all, like it says in my headline. By the way, there have been many a geek who has used that one (insert pronoun here) to rule them all headline. It probably isn’t worth it to use it again.

I’m not certain why it is called the Guppie. Is that because it is fish shaped, like a guppy? By the way, if you run a search on Guppie, one definition is “a gay yuppie”. Not something I would name a tool after, and I definitely wouldn’t have put “Lil” in front of it.