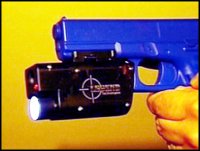 Despite what you see on television, the average police officer discharges their firearm once every five years. I can’t remember where I heard that statistic, but I hope it is still accurate. My point is that police officers generally use their guns as a last resort.

However, if it ever comes down to a time when an officer needs to use their weapon, I can imagine it is a legal nightmare. The officer is then put on the stand, witnesses are interviewed, and it will take quite a while just to prove whether or not the officer in question was right in his or her decision to use his or her gun.

One of the things that might make this legal process shorter is rather simple, a camera that mounts on the barrel of a gun. Certain police departments in Orange County, New York, and Newburgh are trying this out, but it is too early to say if results are happening.

The Pistol Cam, as it is referred to, starts video taping the moment the officer removes his or her weapon. I am assuming that it shoots digitally, and I’m not certain how much time you could get on a device this size. I would be highly surprised if it shot in color, but you never know. Many security cameras are able to shoot in color, and they are not any bigger than the Pistol Cam.

So there might be a way to show legit evidence in an officer-related shooting. However, there might be a flaw in the design as a perpetrator might do several things that would cause a police officer to whip out their pistol. Since the pistol doesn’t start filming until after the gun is withdrawn, the most necessary evidence would not be filmed. In other words, the camera would record the effect, but not necessarily the cause.