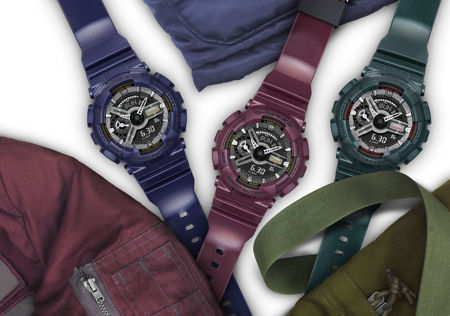 There are watches, and then there are watches. Some of us would just like a functional timepiece that does nothing more than to tell the exact minute and hour, while others would prefer something around their wrist that makes a statement, such as “I have arrived” when they are among their peers. Others still, prefer a timepiece that not only looks good, but is also suitable for their rough and tumble lifestyle. Now, the Casio G-Shock collection has over the years offered tough-as-nails watches without sacrificing on quality and accuracy, although they are not the cheapest options out there, but neither are they out of reach as with luxury names like Rolex and the like. This time around, the folks at Casio have revealed a spanking new S Series Dark Metallic Collection that is slated for release this coming Fall.

Casio’s announcement of the new S Series Dark Metallic Collection will boast of an understated metallic sheen to your eyes, and these watches will be able to add it’s fair bit of glam to just about any ensemble, where it can also be easily carry into the holidays to pair with a favorite party look.

One will be able to take the pick of rich colors that are nothing short of perfect for the fall, the Dark Metallic Collection will include the GMAS110MC-2A in dark navy, the GMAS110MC-3A in evergreen and the GMAS110MC-6A in burgundy – which is reminiscent of riverside blue, lush meadow and dusty cedar within Pantone’s 2016 fall palette. Similar to the rest of the S Series line, these watches are able to make the transition from the gym to a night out with friends at the switch of an outfit, where it delivers a casual, structured and sophisticated look for the active, contemporary woman.

All models will come with standard G-SHOCK technology, including 200M Water Resistance, Magnetic Resistance and Shock Resistance, Auto LED Light with Afterglow World Time with 29 time zones that include 48 cities + UTC, 5 Daily Alarms and 1 Snooze, 1/1000th second Stopwatch, Countdown Timer, and 12/24 Hour Formats, all in a 45.9 mm case, with an asking price of $130 a pop.