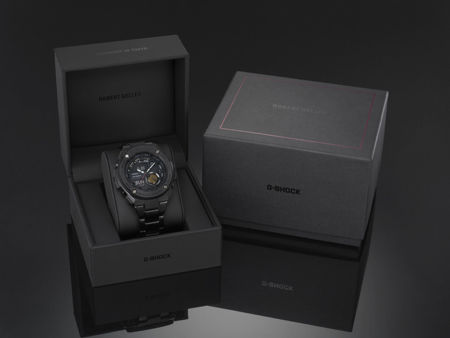 Casio’s G-Shock is a brand name that is always synonymous with quality timepieces — and this is the latest version of their G-Steel watch that they are about to unleash on the world, except that this is a first time collaboration with Robert Geller. The new G-Steel timepiece which carries the model number GST200RBG-1 is a limited edition men’s model that was designed with inspiration by the Tokyo city landscape.

Robert Geller is no stranger in the world of timepiece fashion too, having previously partnered on five consecutive runway presentations at New York Fashion Week: Men’s. Robert Geller shared, “I have been working with G-SHOCK for several years, and was very pleased when we decided to create a watch together. I wore a G-SHOCK watch throughout my teenage years, so it is really exciting to be able to make my own, more grown up version. For the past ten years, I have been producing my ready to wear collection in Japan because I love the quality and care of Japanese craftsmanship. G-SHOCK shares this same love, which is why this collaboration is a natural fit for us.”

The GST200RBG-1 is one of Geller’s “babies”, so to speak, boasting of a black ion plated stainless steel metal band, case and buttons, complete with gold accents on the face as well as a dark fuchsia second hand which makes up his most recent collection. All of the elements will come together to compose of an image of the Tokyo city lights against the buildings at night.

Apart from having G-SHOCK’s legendary structure of shock resistance and 200M water resistance, there are also other technologies thrown into the mix such as an auto super illuminator LED light, neo-brite luminous hands, world time (31 time zones + UTC), five daily alarms, 1/100th second stopwatch and countdown timer and 12/24 hour formats, all crammed in a 52.4mm case. Expect the GST200RBG-1 to cost $420 a pop from this month onward.