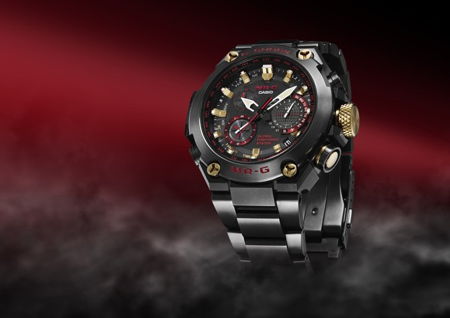 Fancy getting a new timepiece, now that your current one has started to lose its lustre, or needs some maintenance to get it up and running at optimal levels? Casio might have the answer for those who have a Japanese slant to things in the form of the latest G-SHOCK model, which would be the Akazonae-inspired MR-G. This luxury timepiece will boast of coloring that can only be found in traditional samurai armor, and nowhere else.

The latest color addition for the men’s luxury MRGG1000B timepiece that is inspired by the red Akazonae coloring, and this particular color did symbolize rank and valor amongst traditional Japanese military commanders of yore. Paying homage to G-SHOCK’s Japanese heritage and strength, this brand new timepiece will boast of the colors that are found in elite samurai armor, sporting a black titanium bezel as well as band, coupled with red lettering and gold IP accents that provide it with an ultra-refined look alongside the toughness that G-SHOCK is famous for.

Some premium features include a titanium case and band, boasting of a diamond-like carbon coating and sapphire glass crystal that deliver outstanding scratch resistance and durability. This particular model comes with GPS capabilities to boot in addition to G-SHOCK’s Multi-Band 6, and works under the guise of GPS Hybrid Atomic Timekeeping technology that will be able to deliver accurate timekeeping just about anywhere you are. This is made possible via the receiving of GPS satellite signals or terrestrial radio signals from up to six transmitters located around the world, based on one’s location and environment. There is also Tough Solar technology that ensures stable operation even when power-hungry functions are used.