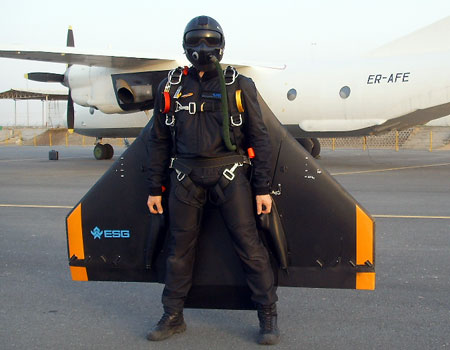 Back in 06 we reported on the ESG Gryphon Personal Flying Wing, and it had military applications written all over it, or, a cool opening scene to the next James Bond Flick. The latest version, rechristened the Gryphon Attack Glider by SPELLCO (the new company name), has slimmed down the weight by 30 pounds and also offers the ability to carry up to 100 pounds of onboard gear and even carry weapons hard points for mini missiles and bombs. Yowsa. And with a maximum glide speed of 135 MPH, that makes this not only an attack glider, but a serious special ops platform for attacking well behind enemy lines.

Pilots wear a specially designed helmet that offers a heads-up display and provides on-board oxygen for those high altitude HALO JUMPS. And with its ability to coast as far as 125 miles inland, jumpers can launch from any air platform outside enemy airspace and glide to their target with a tiny radar cross section. Landing is accomplished by separating the wing from the parachute pack with the pull of a standard rip cord. As the pilot slows his descent, the attached wing dangles from a safety cord to land nearby. Which is good if you don’t want to attract attention by sending it out of control to land where you don’t want it. And while there is a commercial version of the Gryphon for parachute sport enthusiasts, if the company manages to create a fly by wire steering option (it currently steers by hand controllers) and mini jet turbines to increase its range, the Gryphon may go “black” for good.

But where’s the fun in that?