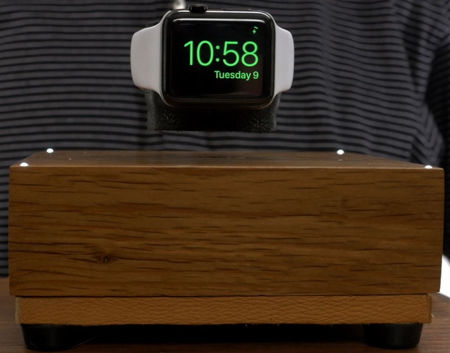 I think it is pretty much a generalization by now that everything that Apple touches will turn into gold, some more instantly than others. After all, with its clean industrial design and ease of use where software is concerned, many of Apple’s products are extremely appealing to the eyes. Another reason that they are in huge demand can also be traced to the ease-of-use, not to mention quality that comes with each purchase. So you happen to own an Apple Watch and would like to charge it up in style. How are you going to do so? Gryker has just the thing for the masses in the form of a levitating Apple Watch charger.

This levitating Apple Watch charger from Gryker remains as a Kickstarter project at the moment, although it does not mean that it will never see the light of day since there is always room for possibility that a particular device will be rolling off production lines if it meets a targeted budget.

Gryker founder and CEO Sheffield Nolan, shared, “Unlike other chargers, the Air Charge doesn’t simply levitate a battery pack with an Apple Watch plugged into it. Instead, the Gryker, patent pending technology, charges your Apple Watch through the air directly from the base using electromagnetic waves.”

How does the Gryker Air Charge work? For starters, it will make use of resonate magnetic waves, hence letting your beloved Apple Watch gets juiced through thin air, as though as it were plugged in, and yet all the while performing a David Copperfield by floating through the wonders of magnetic levitation.

As for the charging puck itself, it will be covered in leather with a polished tungsten counterweight will do its bit to perfectly balance your Apple Watch as it remains floating above a beautiful oak base. Any takers?