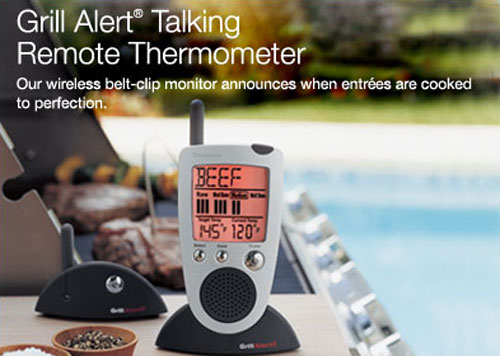 For those that have started grilling out instead of grilling indoors already, you might want to pick up this handy gadget.  Grilling out is fun, but sometimes it can be frustrating if you’re stuck standing near the grill all day.  Then if you do happen to become distracted, you’ve just burned everyone’s dinner and there is no one around to blame except for you.  It’s the short ones you have to worry about the most though, if they aren’t fed, they will come after you.  With this remote thermometer, you’d always know when the meat is done, without having to hover over the grill all day long.

Just grab the handheld and hook it on your belt with the belt clip.  Meanwhile the thermometer stays in the meat.  Your handheld will display the temperature and even announce out loud when the meat is almost done and then done.  Giving you time to run inside to grab something to place the meat on before it’s actually finished.  Both are of course water resistant, so you won’t have to worry about screwing up the electronics while cooking.  The handheld has a backlight for late night grilling.  To keep them powered you’ll need two AA batteries and then two AAA batteries.  It’ll cost you $69.95 from Brookstone.