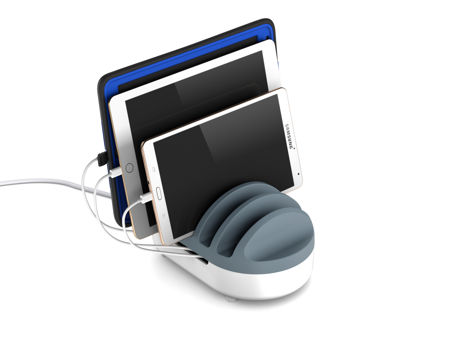 In this day and age, where we are flooded by so many different kinds of mobile devices in our “road warrior arsenal”, it makes perfect sense that we should get organized – any by that, we mean being able to know just which particular device should go with which charger, and on a moment’s notice, we can pack up our bags and bring the respective chargers around when we travel without mixing them up. Back home, however, it is a very different proposition, and having a dedicated charging dock that juices up multiple devices simultaneously is more than welcome. Griffin is no stranger when it comes to charging stations, and this time around, they have revealed the PowerDock Pro. The PowerDock Pro happens to be a five-bay charging system that powers up to five iOS or Android – doing so all at once in order to save time, now how about that? Just in case the PowerDock Pro seems to sound rather familiar to you, that is because it is an update to Griffin’s popularPowerDock 5, where the PowerDock Pro has been redesigned with a sleek new look and enhanced features.

The PowerDock Pro has been deemed to be ideal for multiple-device households and work environments, where it is a snap to stash away an entire fleet of smartphones, tablets and other USB-charged devices powered and ready-to-go. Not only that, it also solves yet another issue that has plagued the modern day road warrior – that of pesky and messy cables associated with multiple chargers being in use at once, as the PowerDock Pro has a built-in cord management system and power supply for a clean desktop or table.

It has been redesigned from the ground up with new features suggested by users, where the PowerDock Pro is more powerful than ever thanks to intelligent self-switching ports that provide a full 12 watts of optimal charging for any iOS or Android device. The weighted base will be able to hold tablets safely and securely in place, while homes and offices enjoy power than ever with five charging bays. It will come with a sticker price tag of $129.99 a pop.