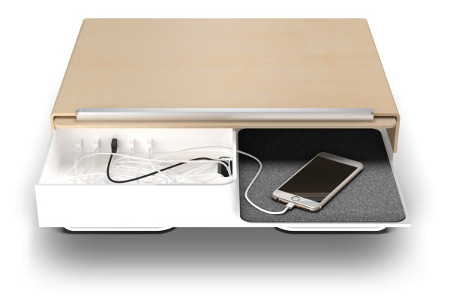 Griffin has decided to think outside of the box, by taking a look at the crowdfunding platform known as Indiegogo in order to raise the relevant funds so that they can come up with something that their customers would also love to have – which means less beating around the bush, or taking aim in the dark for a new peripheral. The device in question would be the Cove Home Charging Station – and make no mistake about it, this is not your regular portable charger, no sir.

In fact, the Cove Home Charging Station has its origins as a research project at Griffin, and its mission is aligned perfectly with the direct consumer engagement of a crowdfunded campaign. Just what kind of performance will the Cove Home Charging Station be able to deliver? For starters, it will boast of not two or three, but five 12 watt USB ports that would be able to cater to a household of 5 comfortably, since that means it can charge up to 5 tablets simultaneously, without making everything look messy since the cables are tucked away nicely.

Underneath the hood lies an integrated power supply that makes use of Griffin’s trademarked ChargeSensor technology, so that each device will be on the receiving end of its very own proper amount and rate of charge. Apart from that, there is a trio of easy-access, non-slip, soft lined shelves that will help you organize your devices as they get their exhausted batteries charged up, all without fear or worry of scratching their screens or outer shells. Last but not least, Cove’s low-profile sliding door will be able to close so that it can conceal devices and cords, and can also be tilted out to serve as a hands-free tablet stand should you want to do your reading, or to following recipes while whipping up a delicious dish in the kitchen, or simply to watch videos.