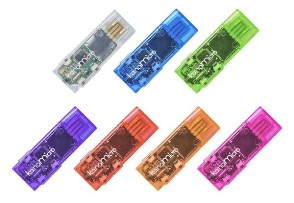 With a name like Green House, you would think it would be a company that would make eco-friendly products. I’m not certain how environmentally sound these new Kana Micro MP3 players are, but they certainly won’t contribute to overpopulation.

That’s right, these Kana Micro MP3 Players take up very little space. You could probably stack a few of these Kanas to create something equal in size of an ordinary MP3 Player. In fact, they are so small, you probably thought the photo to the left was of thumb drives, didn’t you?

Well, the Kana is definitely designed to plug into the USB port, which is how it is recharged. On a full charge, a Kana MP3 Player is capable of up to two hours of playing time.

As for memory, there is about 2GB, but this has to come from a MicroSD card that the user must buy separately. Yeah, I know, you really shouldn’t have to do that. I was hoping that it would already have the 2GB worth of internal memory, but what can you do about it?

Right now, these Kana Micro MP3 Players are available only in Japan for a low price of $16, and they come in a full palette of colors including white (clear), blue, green, purple, orange, yellow, and pink. I’m not certain if the Kana will ever market outside of Japan, but I think it is important to see that the Kana is the popular style of MP3 Player: Small and minimalist.