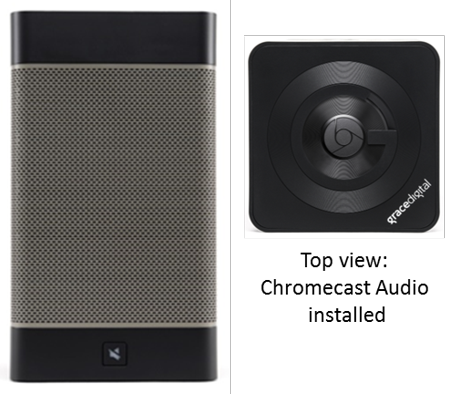 If you have not heard of Grace Digital Inc. before, then here is a little bit of background information – they happen to be the leading manufacturer of award winning Wi-Fi, Bluetooth, portable and home audio systems, and also happen to be first off the blocks in announcing the first speaker that has been made exclusively for Google’s Chromecast Audio device in the world, allowing it to stream music via Wi-Fi to just about anywhere in your home.

There is a market for multi-room Wi-Fi wireless audio, as this particular niche has seen its fair share of products and actions in recent times, where a slew of large as well as smaller sized companies have rolled out their respective devices. Rather than flood the market with yet another model, Grace Digital decided to take the road less traveled, having physically integrated the Chromecast Audio device (which is sold separately) straight into the speaker, now how about that? This means there is no need for an additional app or system to learn – making it somewhat like the Nvidia Shield Pro.

When you are in possession of the CastDock X2 speaker, all that you need to do is to place a Chromecast Audio device on top of the Grace CastDock, hook up the integrated power and digital audio cables, and voila! You end up with an instant, world-class Chromecast enabled speaker which is more than capable of rivaling just about any competitor’s proprietary system out there.

Some of the features that have been incorporated into Grace’s CastDock X2 and Chromecast Audio include the ability to listen to more than 30 million songs from over 100+ cast-enabled music apps such as Pandora, Google Play Music, Spotify, and iHeartRadio, being able to enjoy a higher quality sound, to play music just about everywhere with multi-room feature and without any kind of interruptions, and mirror music from a laptop or Android phone.

The Grace Digital CastDock X2 speaker for Chromecast Audio is going for $149.99 a pop if you are interested.