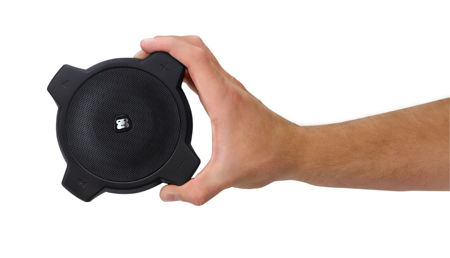 It does look as though when it comes to waterproof speakers, as well as speakers that are capable of taking a fair beating before it succumbs to being spoilt, there is a fast growing market for this niche, going to show just how music has become such an integral part of our lives, so much so that we would want to make sure that our music can be brought with us wherever we go, and also to play them back – while having others listen to the well versed tracks of ours, too. G-Project understands this, which is why they have come up with the G-DROP speaker for the adventurous masses.

The G-DROP speaker has been described to be a powerful, rugged, waterproof Bluetooth speaker that has been specially designed to be able to embark on just about any adventure with you, regardless of whether it will be wet or dry. The G-DROP will come with an asking price of $50 a pop, which is not too much when you take into consideration the kind of features and capabilities with which it comes with.

It does not matter whether you are going to lounge by the pool or to spend plenty of time in the snow, the G-DROP speaker would be at home with outdoor enthusiasts, as it enables folks to take their favorite tunes with them, whether they happen to be sitting on the sidelines or to remain right smack in the middle of all the action. It will boast of an IPX7 rating, allowing the G-DROP speaker to remain submerged in water at a depth of one meter for half an hour, and yet emerge unscathed and still working perfectly.

Not only that, it is more durable that some of us humans in extreme temperatures, working just fine as long as it remains within the -14°F to 122°F temperature band, making it the ideal tool to bring with you regardless of whether it is summer or winter.

It will come with a substantial 2.5” driver, a passive bass radiator and MAXX Audio digital sound processing capability for optimum bass performance. As for its build, you can expect it to last thanks to its double-wall housing and soft-to-the-touch elastomer which wraps around the unit and sealed port covers.